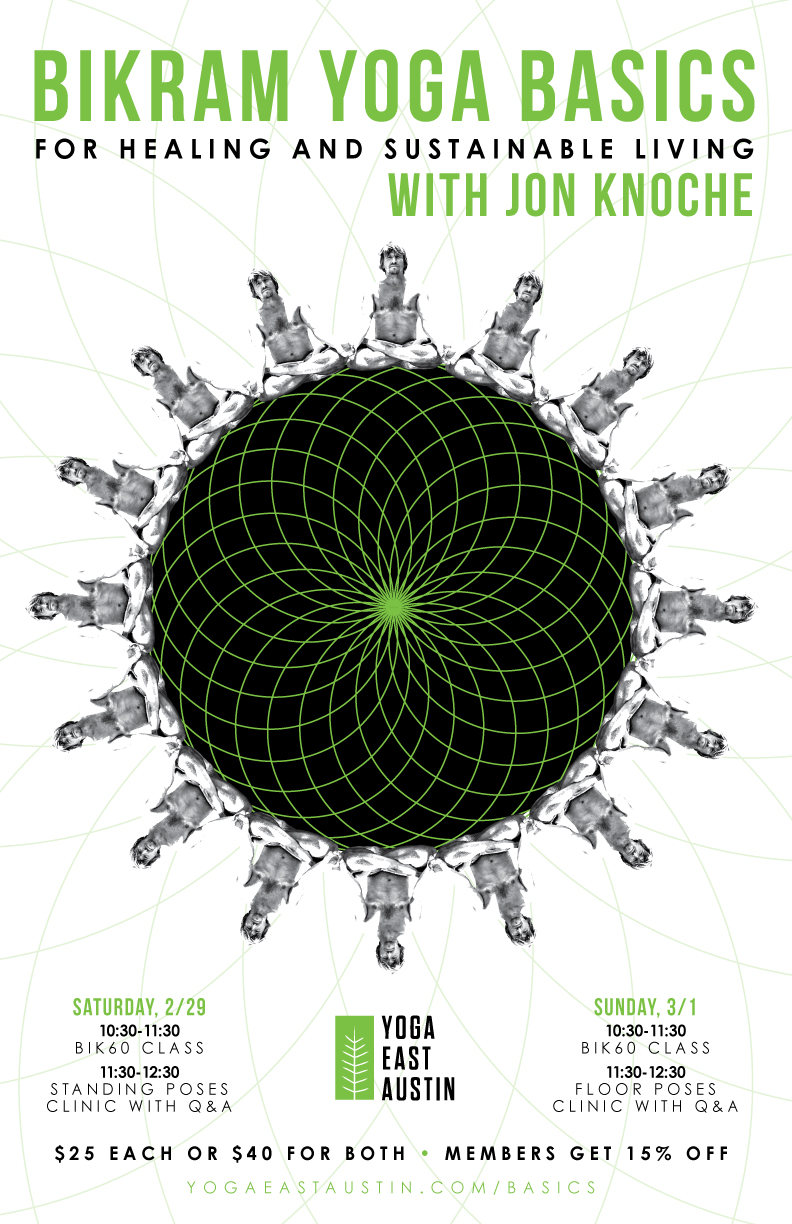 Jon Knoche, the Arizona legend, is back!

Do you love the way you feel after hot yoga?! Have you been enjoying renewed energy and a positive outlook this New Year? Are you looking forward to keep it going?

Well we have a treat for you! Our old friend, and former yoga school owner, Jonny is back! Jon has been teaching Bikram Yoga for 13 years and is looking forward to sharing some of his wisest tales with us…but mostly help you figure out the poses, and tips to keep you inspired and coming back for more goodness!

Be sure to look out for Jon on the regular Bikram Yoga schedule, starting February 22. And do not miss his workshop classes! On Saturday, he’ll break down the standing poses, and on Sunday he’ll address the floor poses!

Sign up for a Saturday OR Sunday workshop class

In 2003 I found myself in the hot room for the first time. I was trying this hot yoga in attempt to avoid surgery on my lower back. The surgery was recommended during an emergency visit after I took a hit while playing basketball. The injury took place during a post graduate workout. I had just finished playing my senior year at UNLV. I was hoping to continue training and find my way overseas to play the game I loved and played since I was three. The emergency room doctor told me never to play again. The surgeon observed an MRI and recommended a full Discectomy on my L5 & S1, and fuse the spine in place. So I did not have the feeling to do surgery, and I received pain medicine and muscle relaxers instead. After someone saw my condition they told me to get to Bikram yoga as fast as possible!

The first class ever was hell on earth as my hips were displaced 4 inches, and my arms so stiff from all the training, that I could not come close to straightening my arms in the Half Moon pose. My body was on fire from all the pain meds. I left the room four times and decided I couldn’t do this. It was too hard so I didn’t go back until three months later. I was still in anguish and pain, the pain killers were plateauing, and I was scared for my future. I was recalling my first class, remembering that I was next to a 60-year-old who did all the poses and stayed in the room…that meant to me that I had to give it another try, and just keep coming back until I was at level of the 60 year old. In six months time after that, I ran a marathon without training because I did yoga every day. I didn’t walk that well after that marathon but in a weeks time of doing yoga I didn’t feel the pain anymore.

Yoga changed my whole health and it was something I told myself I wish I would’ve done a long time ago. In six months time after that I was told by a teacher that I must do the demonstration because my story was so inspiring that they wanted me to stand on a stage in front of hundreds of people and do a three minute routine to show the testimony of what yoga can do for people. When I stepped off the stage I had a realization that I want to be a yoga teacher even though I had a fear of speaking in public, and no money. Out of pure luck (and irony) my teacher training was sponsored by an orthopedic surgeon. The training was again another hell on earth but I tell myself when you are in the middle of hell to keep going to get out don’t stay still, don’t quit.

After three years of teaching I had the gumption to open my own school in Mesa, Arizona. The studio was a success for seven years until a ruthless landlord raised the rent. All I had with me were the two loves of my life: Emma, who I had met the seventh day my school was open, and Julia, our four year old daughter. When we sold our house and gave up 99% of our things, we jumped in our Nissan Sentra with everything we had and drove out to see were things were going to fall in place. We had a short 3 months in California, then two months in Bali Indonesia, and now in St. Louis, Missouri for one year teaching and now traveling to do workshops to share the stories and inspirations that will keep you loving the yoga. The workshop classes will go over all the poses, answer questions, kick back and share stories that will help inspire you to keep your Practice going.